Migrate to Zola with a new design 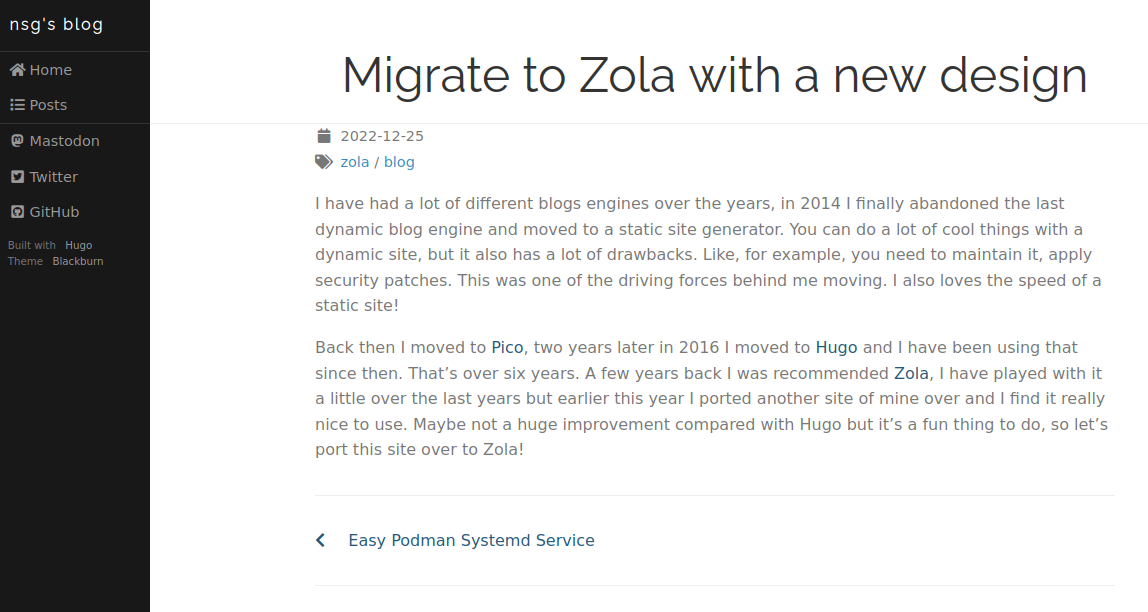 I had some time to thinker with the blog over the last days. There has been a lot of interesting things invented since I last looked deeper at CSS, like flex and grid layouts, animations. Yeah, I have been out of the loop since forever.

I have kept an eye at Podman since Giuseppe started to work on it, I have played with it from time to time and I have been impressed how the project has evolved. Since Ubuntu 22.04 LTS, Podman is finally part of the normal Ubuntu repos so I'm in progress of replacing all my Docker usage to Podman and from time to time I find a few quite awesome small tools, like this one:

I have a lot of servers all over the place, and it's not uncommon that I need to connect them together in some way. For simple setups WireGuard is working fantastically well but I usually need layer 2 networks. For that I still use tinc, another software I can recommend. Before WireGuard was a thing, tinc was easily my default choice.

Last night I installed a new server with an LUKS encrypted drive. The server also has a large ZFS pool that is used as the main data storage, of course that needs to be encrypted as well.

I just realized how easy it is to unlock the disk encryption password on a remote and/or headless server via SSH. There is a package called dropbear-initramfs that does exactly what is sounds like, it embeds a dropbear SSH server inside initramfs, cool!

This is my 3rd COVID post since the start. It feel so strange how things have normalized for me. I recently took my 3rd shoot of the vaccine. The first one was okay, but the second one resulted in me feeling really sick for a few hours with a really unproductive next day. I was worried that the 3rd shot would be the same, but this time I felt just fine. A little tired a few hours after the shot and some pain in the arm for two days, that's all!

A little over ten year ago my cheap keyboard failed and I bought my first Das Keyboard. I'm still writing on the exact same keyboard. Time flies, that's a decade and it still feels, and sounds, like the day I bought it.

My Home Assistant installation running on a rpi3b+ finally failed. More precisely, the SD card failed. No big surprise, I was expecting this and had planned a replacement for some time but I never got to in in time. The good this, I had a recent backup so it's all good! Backup people!

Import a qcow2 image to LXD

I recently learned how to make my own LXD VM image based on Home Assistant's QCOW2 VM images. This blog post is a short write-up how to do that! This is of course useful for other qcow2 images as well.